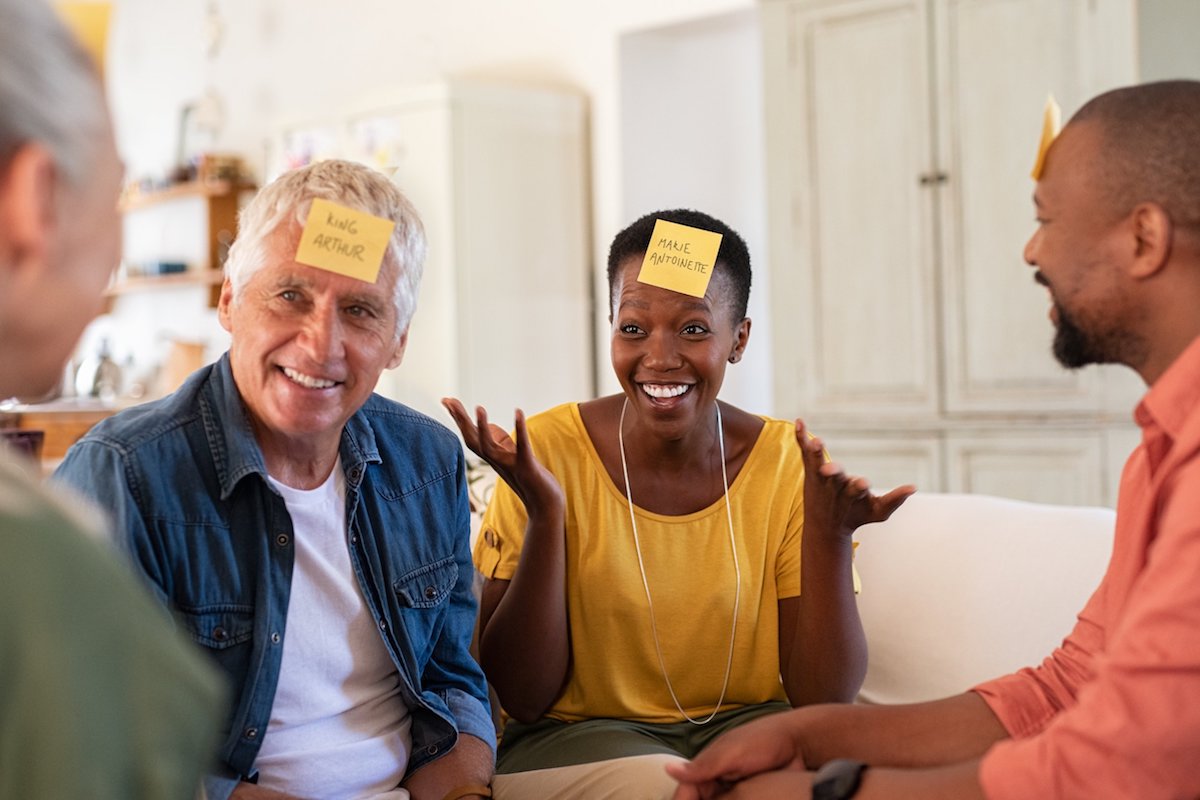 I love a good game, and while I enjoy strategy games, I can’t pass up a game that makes me and my friends laugh until we cry. I needed to refresh my stash of game ideas, so I hunted down some new ones.

So, what are ten hilarious games for adults to play at your next party? These include Charades, Telephone Pictionary, Never Have I Ever, Two Truths and a Lie, Word Association, Cards Against Humanity, Who Am I?, Hearing Things, Heads Up, and Pictionary.

Each of these games brings something unique to your party, so you can choose the best one for the size and personality of your group.

10 Party Games for Adults Sure to Make You Laugh

Charades is often overlooked, but it’s a classic for a reason. It’s great for large groups and can be played with teams or individually. Plus, you can make the game as silly as you want, depending on what words or phrases you use.

This is a game that is part drawing and part telephone. Players sit in a circle and one player starts by drawing a picture based on a word or phrase given to them. The next player looks at the drawing and then writes down what they think it is. The player after that then draws a picture based on that phrase, and so on. This continues until it reaches the last player, who then announces the last phrase or shows the last picture, which is often far from the original.

3. Never Have I Ever

This is a great party game that can be played with large or small groups. The game starts with one person making a statement about something they have never done. For example, “Never have I ever been skydiving.” Everyone who has done that thing then takes a drink or participates in some other “punishment.” This game can get very interesting, and often quite funny, as people start to share things they have never done.

This is another great game for large or small groups. Each person takes a turn telling three things about themselves, two of which are true and one of which is a lie. The rest of the group then has to try to guess which one is the lie. This game is great for getting to know people and can often lead to some interesting conversations.

This is a simple but often very funny game. One person starts by saying a word, and the next person then has to say a word in response that is associated with the first word. For example, if the first person says “cat,” the second person might say “dog.” This continues until someone either can’t think of a word or says a word that isn’t associated with the previous one. At that point, they are out and the game starts over with the next person.

If you’re looking for an edgy game that is sure to get some laughs, then this is the one for you. Cards Against Humanity is a party game in which players try to fill in the blank of a sentence with the funniest, most outrageous word or phrase they have in their hand of cards. Just be warned, this game is not for the faint of heart or a dinner with your in-laws.

This is a great game for large groups. Each person gets a piece of paper with the name of a famous person, character, or another notable figure on it that they put on their foreheads without looking at it. They then have to ask Yes or No questions to try to figure out who they are. This game is great for getting people talking and often leads to some hilarious interactions. 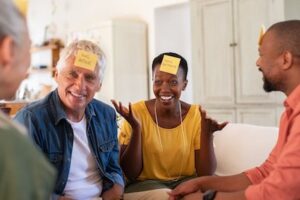 All you’ll need for this one is the Heads Up app. One player puts the phone on their forehead, and the app will show a word that the rest of the players have to act out. Once the person with the phone guesses the word, they flip to the next one and keep going until time runs out. Once everyone has had a turn, the person with the most successfully guessed words wins. This is a great game for large groups, and it’s sure to get everyone laughing.

This is a classic party game that can be played with any number of people. One player draws a picture, and the rest of the players have to guess what it is. The first person to guess correctly gets a point, and the person with the most points at the end of the game wins. This game is great for all ages and can be adapted to any level of difficulty.

So there you have it, 10 hilarious games to play at your next party. Whether you’re looking for something to get the conversation started or just want to have some fun, these games are sure to do the trick. So gather up your friends and get ready for some laughs.

How to Incorporate Games Into Your Next Party

Games can brighten your mood, and they can set the tone for a party. If you want your party to be lively and fun, then you should incorporate a game or two. Not only will it add to the festivities, but it will also give your guests something to do.

It will take a little organization on your part, but it isn’t hard to prepare a few games for your next party. Just follow these steps:

When you’re planning your party, look at your guest list. Note how big it is, how well everyone knows each other, and how well you know everyone’s sense of humor.

These facts can tell you a lot about which party games you should incorporate, as an edgy game like Cards Against Humanity might not be as good of a choice as a round of Two Truths and a Lie for a group that is meeting each other for the first time.

Your party’s games should also be based on the kind of atmosphere you’re trying to create. If you want your party to be more laid-back, then choose games that are easy to pick up and don’t require a lot of instructions.

On the other hand, if you want your party to be more high-energy, then choose games that are fast-paced, lively, and loud. You can even start with a more chill game to get everyone warmed up and then move to a more interactive one to raise energy levels even more.

No one likes to be timed on how long they have to eat at a party, but no one likes to be standing around wondering what to do either. As the host, it’s a good idea to have a general outline of how the party will flow so that no one is bored or uncomfortable.

For example, if you serve cocktails and appetizers as your guests arrive, plan to have a game ready to go about 30 or 45 minutes in to help break the ice and get people interacting and energized. Then have another one ready to go after dinner to help keep conversations flowing. You can adjust on the fly if you need to do it sooner or don’t need an organized game at all, but at least this way you have a starting point. 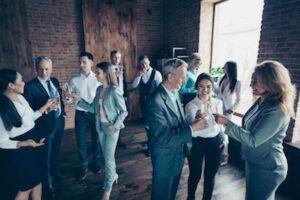 Do I need to buy board games for my party? Not necessarily. Many games can be played with an app, a piece of paper, and a pen, or nothing at all besides your creativity and sense of humor. If you do want to try a new board game, consider borrowing games from friends or renting them from a local board game cafe. This way, you don’t have to invest in something that will just sit on your shelf until the next party.