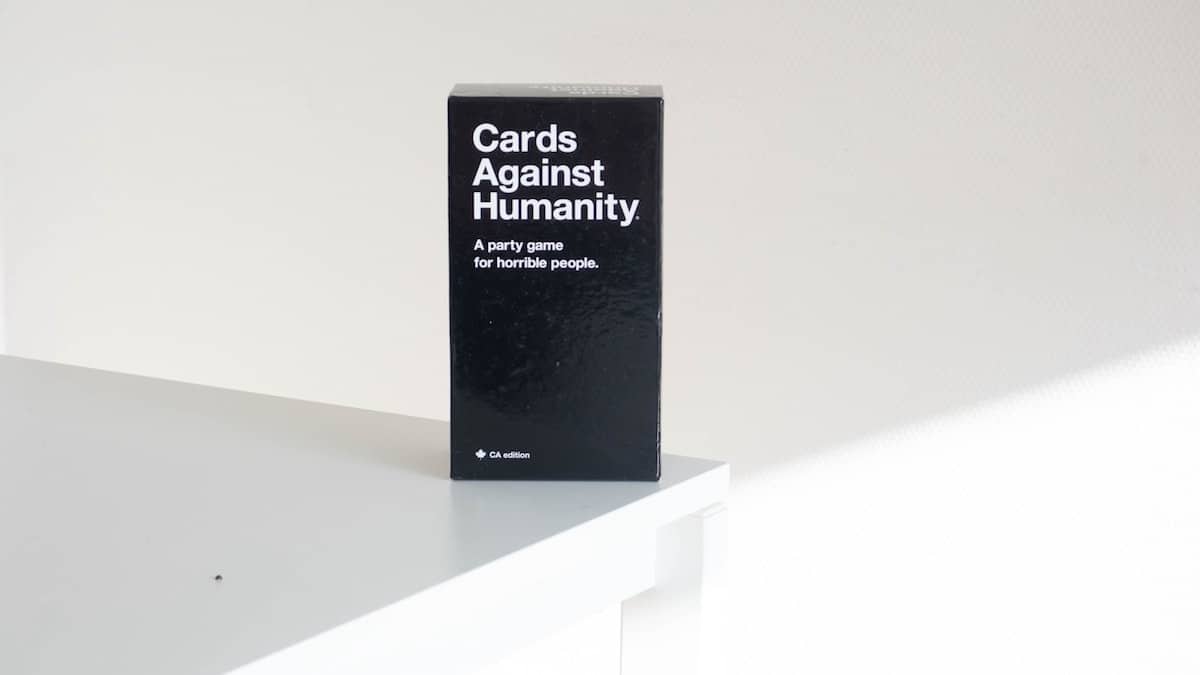 There are no rules, and players can do whatever they like. There are two types of cards: black cards and white cards. Black cards are questions, and white cards are answers. Players take turns to read the black card out loud, and then everyone else must choose a white card to answer the question. The person who reads the question then chooses the funniest answer, and that person gets a point. The game is over when someone reaches a certain number of points, or when players get bored and decide to stop.

Cards Against Humanity is not a game for everyone. Some people find it offensive, and it is not suitable for children. As this is a game for people who enjoy dark humor. So, if you are easily offended, or if you are under 18, you should not play this game. However, if this is okay with you, then this game is sure to provide endless hours of entertainment for everyone involved. If you would want to learn more about the game and how to play it, keep reading! 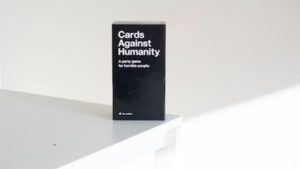 The Official Game Rules of Cards Against Humanity

The object of the game is to create the most outrageous or humorous statement using a combination of black and white cards. There are no rules, so anything goes! This is evident as players can use any language they like, and there are no right or wrong answers. The only aim is to be funny.

If you want to play the game using the official rules, here’s what you need to do:

1. Gather a Group of Friends

You’ll need at least 4 people to play the game, but more is always better.

This person will shuffle the deck and deal out the cards.

3. The Dealer Will Start by Reading the Black Card Aloud

The rest of the players will then select the white card from their hand that they think is the funniest to the black card.

4. The Dealer Will Then Reveal All of the White Cards and Read Them Aloud

The player who submitted the card that was chosen as the funniest will get 1 point.

5. The Next Black Card Is Then Drawn

6. Then the Process Is Repeated Until All of the Cards Have Been Played

The game is played with a deck of cards. Each card has a black question or answers on one side and a white answer or question on the other. Players take turns reading the question from a black card aloud. The player with the black card then chooses the white card they think is funniest and places it face down in front of them. The rest of the players then do the same. Once everyone has chosen a card, the cards are revealed and the player who chose the black card reads all of the white cards aloud in turn. The player who chose the funniest card is awarded a point. The game continues until either all players have run out of cards or one player has reached a predetermined score. 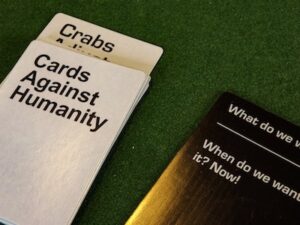 The game is simple, to win the game, you need to be the funniest person at the table. However, there are a few other things you can do to give yourself an edge.

1. Pay Attention to the Cards That Have Been Played

If you see a lot of cards with similar themes or topics, you can try to play a card that fits that theme.

2. Be Aware of the Other Players’ Card Choices

If you notice that someone always picks the first card they see, you can try to play a card that you think they’ll find funny but won’t be able to resist.

The funniest cards are often the ones that make the most absurd connections.

4. Don’t Take the Game Too Seriously, the Whole Point Is to Have Fun!

In this version of the game, the objective is to choose the white card that is the least funny to the black card.

This is a more chaotic version of the game where players can play any card they want, regardless of whether it makes sense or not.

This is a version of the game that has been specifically designed to be safe for families to play.

4. Cards Against Humanity: The Movie

In this variation, players act out scenes from their favorite movies using the cards.

5. Cards Against Humanity: The Musical

This is a musical version of the game where players sing songs using the cards.

6. Cards Against Humanity: The Game Show

This is a game show version of the game where players compete to see who can come up with the funniest answer to the black card.

7. Cards Against Humanity: The Drinking Game

This is a drinking game version of the game where players take a drink whenever they lose a point.

8. Cards Against Humanity: The Board Game

This is a board game version of the game that can be played with 2-4 players.

9. Cards Against Humanity: The Card Game

This is a card game version of the game that can be played with 2-4 players.

10. Cards Against Humanity: The Party Game

This is a party game version of the game that can be played with 8 or more players.

11. Cards Against Humanity: The Video Game

This is a video game version of the game that can be played on your computer or mobile device. 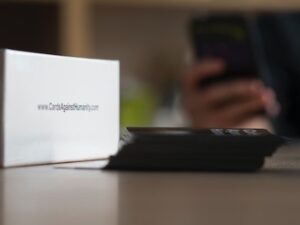 Why Do People Play This Game?

There are many reasons why people enjoy playing the Cards Against Humanity game. For some, it is a way to relax and have fun with friends. Others find the game to be a challenging and stimulating experience that can help them develop their strategic thinking skills. Regardless of the reason, the popularity of this game continues to grow, as more and more people discover the many benefits it has to offer.

One of the main reasons why people enjoy playing Cards Against Humanity is because it is a very social game. Players have the opportunity to interact with one another on a variety of levels, which can help to create a strong sense of community. In addition, the game provides a great way for people to bond and connect. This can be a particularly valuable experience for people who may not have many friends or who may feel isolated from their peers.

Another reason why people enjoy playing Cards Against Humanity is that it is a very challenging game. While the basic premise of the game is relatively simple, there are several different strategies and tactics that players can use to try to win. This can help to keep players engaged and motivated, as they strive to improve their skills and strategies.

Finally, many people enjoy playing Cards Against Humanity because it is a very fun game. The humorous nature of the cards and the overall tone of the game can provide players with a great deal of enjoyment. This can be a great way to relieve stress, as well as provide players with an outlet for their creativity.

If you are interested in playing Cards Against Humanity, there are some different ways to get started. You can purchase the game online or through a variety of retailers. In addition, there are many different websites that offer the game for free. Regardless of how you choose to play, you are sure to find that the game is a lot of fun and provides a great way to socialize and bond with friends.